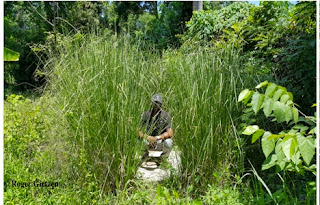 THE VETIVER LATRINE from Roger Gietzen (see: http://www.healthy-mind-body.com/humanitarian/vetiver_latrine.html for details of vetiver latrine design and its construction)

"It's now been three years since I started installing vetiver latrines in Haiti.  For all those who helped me with that project, I want to thank you again.  You know who you are.  Here is an update on my progress:

175 latrines have been installed in the two communities I serve.  They are providing sanitation where there was absolutely none.  The people are happy and likely healthier.  There was not a case of cholera this last year, whereas in the previous years there was always 1-2 during the rainy season. But these numbers are too small to draw conclusions from.


I have not done any formal testing on whether the leachate is cleansed while moving through the vetiver roots, or whether it inhibits bacteria.  If anyone wants to travel to Haiti to conduct such testing, this serves as an open invitation.

Although the latrine method has not yet spread rapidly in Haiti, it is disseminating. The technician who does the best installation work has traveled to 4 other communities in Haiti and sponsored training sessions there.  At least one of the communities has started their own program.

To date, the latrines have proven to be durable and lasting.  Of 175 installed, only one pit collapsed.  That failure happened because the pit filled with rainwater before it was capped with the concrete slab.  The standing water inside eroded the pit walls and it caved in just weeks after it was finished.  That was an important lesson for our team.  They left the pit uncovered too long during the construction phase, and I believe it was located in a rainwater runoff zone.  Both are problems that can be easily avoided in the future.

It appears the latrines do well even when installed in partial shade.  We encountered many households that had mostly shaded land.  To address that situation, I purchased a quality handheld pruning saw for the team.  But occasionally it's not realistic to create a full sun exposure area, either because the trees are too large or there are fruit trees which cannot be heavily pruned.  I found that even in moderately shaded locations the vetiver grew and the pits have been stable.

The latrines are easily modified.  Some communities expect an elevated seat, or a privacy screen from day #1.  Without any input from me, the people have come up with some solutions to these problems.  A plastic bucket or a cement stand have been used as a seat.  Just about anything can be used for privacy.

At the schools in Haiti, it is expected that the boys and girls have their own seats.  At one small rural school the team met this expectation in a creative way.  They simply made a larger concrete slab, by combining two of the plastic forms to make one large one.  Then the elevated seat was modified so that two holes were located on the top.  In the end, this was an adequate solution for that community.

One of the biggest challenges I have faced has been due to lack of recognition of the importance of the vetiver grass.  Some families intentionally removed the grass, others swapped it out for a different plant and others allowed their kids to trample it to death.  When I assessed these situations, in every case it was clear they did not understand that the vetiver roots actually performed an important function in stabilizing the pit walls.  After I explained to them that I was concerned their toilet could fall in and I wanted them to have a latrine that lasted for decades, they all fixed the problem.

Now I have created educational materials to prevent this.  I have made a cross-section drawing which depicts the roots holding the pit walls up and included this in a document written Creole, with some other images.  The team will show this to every family before they build the toilet.  Soon I will know if this prevents the problem.

Another unexpected problem that I have encountered, is that some Haitians reject the latrine.  So far I have found that the people with no toilet or latrine at all, universally embrace it.

The ones who reject this have been men in leadership positions, who have nicer toilets at their homes, and feel the vetiver latrine demeaning to the people they serve.  They have made this decision without actually asking the people themselves.  It appears that it is pride which causes them to reject this solution even when no other solutions are in sight.

I believe a flood in demand for the vetiver latrine is inevitable.  So my solution to that problem is to just move on and help those who want it.  Someday many people will appreciate this solution which makes sanitation accessible, here and now, even for the poorest in the world. And on that day, even the proudest in the community will soften up to the idea that the vetiver latrine is far better than no latrine at all.

Thanks again to the vetiver community for supporting this initiative.  I people our collective efforts are important for spreading this solution to the ones who need it most".

Posted by The Vetiver Network (International) at 10:20 AM

You are welcome to comment and discuss, but please do NOT include links to non vetiver related businesses -- such posts will be deleted

READ MORE ABOUT THE VETIVER SYSTEM - PROVEN & 'GREEN' ENVIRONMENTAL SOLUTIONS. The Vetiver Network is a worldwide network of Vetiver Systems users, researchers and developers providing solutions for improving our environment and reducing poverty.

A publication of the U.S. Dept. of Agriculture - NRCS (Natural Resources Conservation Service)